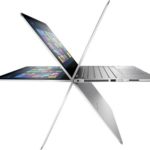 A laptop, often called a notebook or "notebook computer", is a small, portable personal computer with a "clamshell" form factor, an alphanumeric keyboard on the lower part of the "clamshell" and a thin LCD or LED computer screen on the upper portion, which is opened up to use the computer. Laptops are folded shut for transportation, and thus are suitable for mobile use. Originally there was a distinction between laptops and notebooks, the former being bigger and heavier than the latter, as of 2014, there is often no longer any difference. Laptops are commonly used in a variety of settings, such as at work, in education, Internet surfing using sites such as YouTube and for personal multimedia and home computer use.